Our Smudge comes from A Navajo reservation and makes a substantial contribution to the economy of these people.

The Traditional Use of Aroma to Cleanse and Heal

The traditional and ancient art of smudging has many variations. The principle however is the same for them all. A potent aromatic herb, oil or spice is burned and allowed to smoulder which releases smoke. It is this smoke which is said to contain the spiritual properties for which the incense is being used.

Often herbs are dried and tied in bundles called smudge sticks or braids. Other cultures would simply take a branch of an herb plant and place it within the flames or a fire. Often hot coals were removed from cooking fires and used ceremonially with the addition of magical herbs. Smudging occurs in many religious ceremonies and has been established in many cultures worldwide.

Surrounding yourself with a calming and heady aroma from smudge can assist in a meditative state. Using the sensation of smell a pure point of thought can be established which can be a catalyst for opening up your consciousness.  Again specific herbs contain particular scents that are more able to assist with various types of mood alteration and thought provocation.

The herbs which are burned are allowed to release their aroma which contains spiritual energy. This scent of the smoke invigorates the mind and has defined effects depending on which herbs and oils are present within the smoke. By wafting a smudge stick around the general area of a client or a room the smoke is thought to purify the energy of that area. Especially the aroma of smouldering Sage and Cedar are thought to do this. The method of wafting the smoke in order to clean and purify energies is often called smudging or washing.

Ritual and Informal Use

Many people who use smudge will have a ritual they like to follow when practicing this tradition. It can be very personal as to how someone will use these things but it is generally accepted that you can charge your intentions into the herbs by holding them and willing your plans into them before lighting. You may wish to repeat a mantra as you waft the smoke around, or envision the effects of your work on the energy levels, cleansing, shifting, re-aligning.

When you take your smudge home and prepare it for use, it is usually empowered or charged by the user. To do this you should hold it and put your thoughts into it that you wish it to fulfil a purpose. Tell it what you intend for it to do. This can be as simple as saying it out loud, or in your head, it can be a simple sentence or perhaps a mantra or prayer. When you choose to light it and allow the smoke to waft around your space keep in mind the intent for the aroma. As you smell it, as you see it reach up to the outmost spaces of your room or area continue to know what its purpose is.

Palo Santo sticksSmudging in PracticeThe Traditional Use of Aroma to Cleanse and HealThe traditional.. 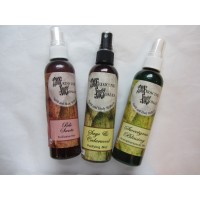 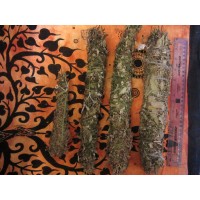 Mugwort and British Sage Smudge SticksSmudging in PracticeThe Traditional Use of Aroma to Cleanse an..